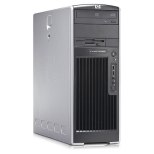 Reasons for the Workstation:

You will also see from the above Image – It upgraded to Windows 10 with no issues at all – so I am now running VMWare Workstation 12.

I have installed 2 SATA drives – One for OS and a 2TB for VMs – but I just bought a 2.5″ Caddy to install an SSD which i will migrate my OS over to very shortly.

UPDATE: I purchased another CPU for £14 on Ebay Used, and realized that the Heatsink was actually going to cost more.  I purchased a used Heatsink for £30 and got this installed.  This now has 2 x Xeons CPUs with 8 Cores

UPDATE 2: I ordered 64GB RAM off Ebay for £90, The HP Specs state 32GB but so far I have added 48 GB and it is working fine.  Looks like I may have an issue with one of the DIMMS, so leaving it at 48GB for Now and will try again soon.

Next thing, I needed more than 1 Monitor so I can work of my MAC and my LAB at the same time, so i went a bit overboard and setup 3 x 21.5″ Monitors:

Cost wise – this worked out well as I already had the 32GB of RAM; heres a list of what i have bought/am buying:

This is still very much work in progress but will update my Homelab page: Home Lab as i progress